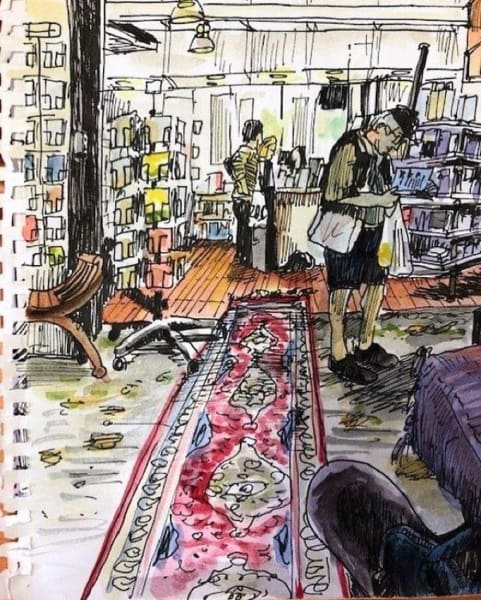 I have been deeply humbled and immensely challenged in being asked to introduce this book and its author, Alasdair Cannon, at this the Townsville book launch of “Holding Patterns”. Can I also say on behalf of the literary community of Townsville, how deeply honoured we are to be seated beside the other literary giants of Australia, Brisbane and Melbourne. Small we may be, but backwater we ain’t.

By way of introduction, my name is Kristell Scott and I have known the Cannon family and Alasdair since 1997. Not long after, Isabella and I began a little book club and it has endured for the entirety of those 25 years and I suppose when Isabella thinks of books she possibly cannot avoid thinking of me, so I received the honour of being asked to present Alasdair’s first published work to you.

In my 25 most recent years I have also worked at Townsville Grammar School, where I was witness to Alasdair’s growth as a gorgeous young human which culminated in Alasdair being named Dux of School in November 2011. This was a moment when I distinctly remember a rush of pride and tears as Alasdair’s name was announced as Dux. Can I say, I felt that same rush of emotions when I first held this book – this essay collection of Alasdair’s.

This book, I can honestly say, has been one of the greatest cognitive challenges I have faced –  since my studies of Psychology in which I delighted in my enlightened youth at university.

In preparing for this introduction I began reading Alasdair’s book and attacked it with my usual English teacher’s pragmatic approach of reading the words and investigating the meaning of each one then re-stating the sentences and paragraph to be able to better clearly understand the full meaning of each and every word, clause, sentence, paragraph, and ultimately, the essay. I applied this systemic approach to not only the published paragraphs but also     to each reference and sub reference.

To say the process was exhausting is a trepidatious understatement. I feared I simply was not intellectually capable of this task. The emotions continued as I read and I began to experience my own sense of inadequacy and a rush of self doubt. In retrospect, I have no doubt this was a clever ploy by this young author so that we could empathise with others, such as himself, for whom self doubt and crippling anxieties are an everyday experience.

As I continued to read – and understand – and in particular, in reading Al’s second essay about the value and interpretation of Art, I allowed myself to r e l a x. Instead of having to understand and logically interpret EVERY word and its ontological history, philosophical background and entymology –  I could actually appreciate his literary output as a work of ART. I can see so many brushstrokes in his set of essays and techniques and his use of highlight and shade, his juxtaposition of light and dark and also the flashy gilding techniques. I was able to stand back and view this as I view my favourite works of art. My personal favourite is a work of art by the famous – but emotionally tortured – Gustav Klimt. It is one of his lesser known works called The Park. In viewing this work in Vienna you can focus in literally on each brush stroke – each twig and limb, each leaf and branch, each shadow and sunlit background through the tree trunks . BUT the beauty of the work can be best appreciated through the enjoyment you get from standing back – appreciating ALL of the elements cohesively and then thoroughly enjoying the emotional connection you have with the overall painting. It is not imperative to see each stroke, if you can actually appreciate the collective whole.

In taking this approach, what I began to really appreciate was the overall bravery and hopefulness of Alasdair’s work. Alasdair, I am pretty confident that, for everyone who has or will read your set of essays, we cannot help but be in deep admiration of your HONESTY. To insert so much of yourself and your darker experiences of despair and depression into a publicly available document is incredibly brave and far more raw than most human beings would ever allow themselves to be.

It is a salient lesson for all of us of the barriers we build around ourselves and the dangers of such high fences, when a modicum of vulnerability would help us all be better and more relevant people.

And in reaching these depths with you, I could not help but be incredibly impressed and deeply grateful for the sense of hope that you then gave us – as your reader. You provided light in what could otherwise be perceived as a deeply suffocating blackness.

All humans are hard wired to love a “happy ever after” type of ending. You avoid that artificial sweetness but you do propose possible solutions and also accept the flaws of your own methods of reaching these places. Your level of self reflection and ability to “see yourself as others see you” is just inspiring. Your proposals of social contructs to basically build better people are simultaneously intellectually provoking and deliberately provocative.

In this age of individualism, your ability to demonstrate empathy and reflection, gives all of us hope that there is a place for Collectivism and a better sense of community in a future yet to come.

This is not a soporific sedentary tome. It is a wide eyed and honest appraisal of who we are and how we got here with references from Socrates to Jaye Z, from David Bowie to Descartes, from papyrus rolls to digital metaverses. And if these references don’t impress you believe me the vocabulary will!

I have talked a lot about my impressions of Holding Patterns, but I particularly liked Sam Cooney’s summary of these essays when he said Alasdair is a uniquely gifted writer. As Sam Cooney says, “There’s no writing being published in Australia that is quite like Alasdair Cannon’s”.

Ladies and Gentlemen, it is with genuine admiration that I commend Alasdair’s book to you. In the words of the great Molly Meldrum “Do yourselves a favour” and purchase this book, read Al’s essays and be provoked, challenged and ultimately impressed with the depth and breadth of this young man’s quest for meaning and purpose – not just for himself but on behalf of us all.

Whilst it is not a hefty, long book, this one represents incredible value as it punches well about its weight and will have a long and lasting impact on your head and heart. Congratulations Alasdair and please continue your career in writing – fact, fiction, short or long. We have only just begun to hear from you and cannot wait for your next chapters.

To purchase a copy of Holding Patterns, please visit our shop page.